Take Your Teaching to a New Level: How to Brainstorm a New Course Fast! 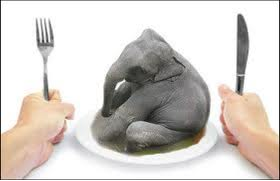 Rule #1: Don't Let Yourself Get Overwhelmed
It is a fact of life that many of us just keep doing the same thing over and over because we don't feel like we have the time or the energy to do it any other way. This is particularly true for teachers.

One of my daughter's middle school teachers, I have been assured, has taught pretty much the same lesson for the past ten years--the same old videos, the same old study sheets, the same old tests. I'm all for "if it ain't broke, don't fix it." But after ten years, it's got to be hard for that teacher to put much enthusiasm into his work.

This is a situation Pat Foltz facing all the time in her work as a professional trainer. “For a lot of the teachers I train, the thought of building a new course is just too much to think about,” she says.

“They ask me things like ‘How do I even begin when I'm going to build a new course? How do I take all this information that I have—all these ideas in my head, and put them in some sort of order? How do I make sure I'm covering every detail?’ They think it would take weeks to make sense out of all this, and they just don’t have that kind of time. So what do they do? Nothing. That’s not fair to the students. And it keeps the teachers stuck in an unfulfilling rut.”

Chunk it up!
Part of the reason it all seems so hard, she says, is that most "thinking tools" make it really hard to break down something big into manageable chunks--to, as they say, eat an elephant "one bite at at time."

“You can't do a project,“ Foltz says. “You can only do tasks. So, if that big project is out there, it's just this huge, monstrous thing for me to avoid. But the minute I can put it in the middle of a circle and start saying, ‘OK, let’s see, how I develop my class is…’ then I’m moving forward.”

Here's the map Foltz made to start thinking about how to create a new Speech class (click on the image to enlarge it): 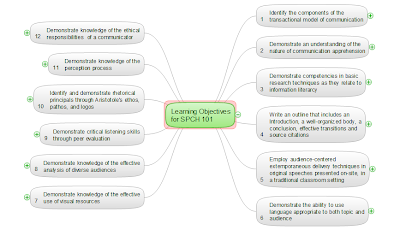 Foltz counsels people to put the "elephant" right in the middle of the map and then say, “OK, what do I have to do here? What do I have to think about?” You begin a project, she says (whatever that project may be), by using mind mapping to break it into big tasks.

Then you break the big tasks into smaller tasks, and then even further down until you have those discrete, doable things you can take action on to move toward your goal.

Good Thinking is a Horrible Thing to Waste
Foltz notes that whether working individually or in groups, we often come up with some great ideas: a course we want to create; a new way to communicate information in an existing course; how to combine two different courses to creat something greater than the sum of the two. But what happens to those ideas?

One trainer Foltz spoke to talked about how a group of well-paid people put aside their normal work load, assembled in a conference room, and started brainstorming. They ran around from flip chart to flip chart, thinking of all these great ideas.

But when the trainer asked the participants what happened to the flip charts—and the ideas—after the meeting, he got answers like, “I don't know,” or “They're on somebody's desk,” and even, “They threw them away.”

For Foltz, the real crime is the loss of ideas (plus the money it takes to generate them--and the stale teaching that happens without putting those ideas into action).

So if you feel the need to freshen up your teaching, use mind mapping to capture your ideas in a way that you can continue to interact with them, to develop them step by step into the kind of course you'd like to teach. It might not be nearly as hard as you imagine. And think of the joy you--and your students--will feel when you stand up in front of the room, filled with new energy and new ideas.