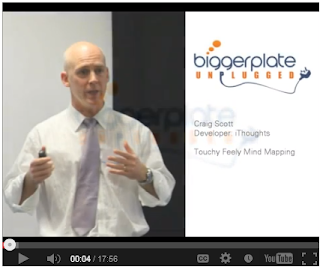 (Again, let me turn your attention to The Mindmap Blog's "Mindmapping Thought Leaders Share Best Practices in London" for each speaker's video.)

Craig Scott: iThoughts
The second speaker at the Biggerplate event was Craig Scott, founder and developer of iThoughts (http://www.ithoughts.co.uk), which develops mindmapping apps for the iPhone and "iPad" (see below).

I have to say that in this speech the sound quality is pretty bad, so I couldn't hear everything Craig had to say. I captured as much as I could.

Craig's overall topic is how different it is to program for iPads versus laptops. (He uses "iPads" as an inclusive term for that kind of platform, whether Apple or Android. His purpose being, I imagine, to educate the mind mapping company representatives in the room about what mobile mind mapping apps need to look and behave like.

He breaks down the differences into four main categories: Physical, Demographic,Expectations, and Business Model.

The Perfect/Killer Mind Mapping App for the iPad

Finally, Craig offered what he thought would have to be some of the central attributes of the perfect mind mapping app:

The Future
So... interesting ideas about what mind mapping companies need to do to stay relevant in this ever-more-mobile world of smaller devices. We used to love the idea of flashing a map up on a wall so we had lots of room to think and move.

Doing this kind of thinking on an iPad screen--not to mention an iPhone screen--will certainly test the skills of mind mapping software developers worldwide, which is a good thing!