January Biggerplate Event: Nick Duffill on the Mismatched Expectations of Mind Mapping for Business Use 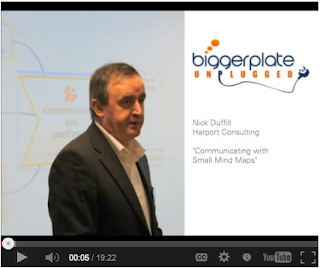 (Again, let me turn your attention to The Mindmap Blog's "Mindmapping Thought Leaders Share Best Practices in London" for each speaker's video.)

Nick Duffill: Harport Consulting
Another interesting presentation, this one from long-time friend Nick Duffill. Nick's focus was on what happens when you take mind mapping into the world of business, and he had some provocative things to say. I'll try to do them justice.

I should say before I get started that as I was taking a shower this morning it dawned on me that I should be presenting the content of these talks as mind maps. Duh! Well, I'm a writer at heart so I will just continue with good ol' text. But if anyone out there wants to take my posts on this event and represent them as maps, have at it!

Thereupon hangs a tale
But on to Nick's preso. So Nick started off with a humorous and apocryphal story about the time he was using maps to help him mange a project at a high tech company. He had created a masterful map... complex, dense, information rich, a real knowledge object... when the managing director of the company happened to walk by, notice Nick's mind map and ask what it was. "This is my big chance to introduce mind mapping into the company," Nick recalled thinking. Instead, this tech-savvy, smart director told him never to use that software in his company again.

Any club that would have me as a member...
I could hear the groan from the audience as Nick said this. But I think it's fair to say that Nick's interaction with this person either caused or confirmed an epiphany: One of the big problems with adoption mind maps have in the business world is that they are so foreign. And when some people see all of their company's proprietary information in a form they don't understand and don't know how to access--some of them understandably panic.

As Nick summed it up:

"Mind mapping creates barriers because it looks "exclusive""--in the sense that it excludes people who aren't familiar with the format.

He defines maps as small not just those with few branches, but those that have been built in such a way that when the map is collapsed all the way, the central five or six branches summarize the rest of the contents of the map or state a conclusion that can be drawn from the information in the map.

And since that so rarely happens--since maps are rarely concise, it makes it hard for mindmapping to make it into the mainstream. in fact, Nick lays out 4 main reasons why maps don't synch with standard expectations for business software. 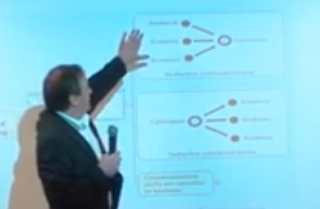 A proposal for maps that reflect inductive thinking
This is getting too long. But I just want to mention in brief Nick's overall conclusion. It is, if I understood him correctly, that map makers need to think in terms of inductive, rather than deductive thinking when creating maps that will be shown to others in a business environment.

To hear more from Mr. Duffill about inductive versus deductive thinking and how each are reflected in the construction of a mind map, listen to his complete presentation.