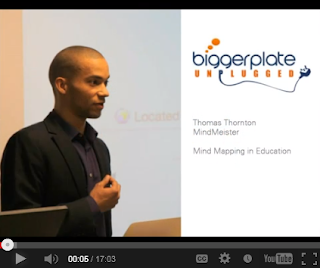 This is the ninth and final recap of the presentation at the January Biggerplate event in London. To see each presentatioin in its entirety, please refer to The Mindmap Blog's "Mindmapping Thought Leaders Share Best Practices in London" for each speaker's video.

Teach your children
The final speaker was Thomas Thornton of MindMeister. Given that the theme of the Biggerplate event was getting mind mapping into the mainstream, Thomas began by suggesting that one good way to get there was by focusing on encouraging the use on mind mapping within education. He said that students are a good target because they are open to new ideas and usually willing to embrace new technology.

(Other companies have taken this approach in the past, with greater or lesser success. Many companies also include education pricing in their sales structure. But I personally think it is fair to say that Inspiration is the only company that deals with mind mapping that has made bringing mapping to the young the key focus of its business model. It's actually kind of odd that Inspiration is never mentioned when mind mappers talk about mind mapping. Why is that?)

What's the problem?
Thomas noted that some of the main barriers to acceptance among educators are:

But there is nothing unique about any of these barriers. They are the same ones mind mapping companies face in pushing their technology into businesses. The one difference may be what he mentions first--that younger people are just more open to trying new things. Another advantage may be that professional educators are always on the lookout for new ways to help kids learn.

Thomas described how he taught mind mapping at one elementary school, first having the kids create a mind map of themselves, then having them build one together. The principal was sufficiently impressed to ask him to come back and teach more classes.

Can Ubiquitous Connectivity Help the Spread of Mapping?
Thomas referred to Seth Godin's "pre-connected" and "connected" worlds. The first refers to the time when information was scarce and processed by people in isolation (think someone at a library digging through the stacks alone).

In the connected world, information is not just plentiful, but offered up in a world of tremendous, 24/7 connectivity and at least the opportunity for relatively accessible ways to collaborate. And that may give mind mapping companies new routes to the mainstream.

Provide the technology and the context

Thomas offered up as a case in point--a recent article in a German newspaper about organ donations. The newspaper wanted to create a lot of conversation around the topic. So in addition to listing comments in the standard text format, they also gave readers the ability to add comments to a mind map.

First the paper give readers instructions on how to read a mind map. Then the showed how to enter comments into the map. (There was a very simple color-coded format for comments.) So this experiment on the part of the newspaper.

It also get mapping in front of millions--and in a context that helps make it clear how mind mapping can help the process of knowledge sharing.