I mentioned eagereyes.com the other day. This is the braindhild of Robert Kosara who, it turns out, is a very prolific thinker on the subject of data visualization.

I ran across his work again today in a post on the Harvard Business Review Blog. Here's the map I made of his post (and I'll post it to Biggerplate):

What I thought was interesting about his post was that:

In another recent paper, Thinking Deeper About Visualization, Kosara wrote something that, I have to admit, made my heart skip a beat:

For example, two separate participants explained that they considered the donut chart less stable because it seemed like it might “roll away.” This kind of analysis also seemed to underly the evaluations of the bubble chart as unstable and uncontrolled, with participants describing this chart as “ﬂoating bubbles that were barely contained within the area” and “scattered.” Similarly, charts without joined pieces were often described as “ﬂying apart” or “exploding.”

Is he referring to mind maps when he says bubble charts (I have heard people use these terms interchangeably)? Do people feel that way when they see a mind map? Is all hope lost?

But further communication with Kosara relieved me when he said he was referring to a scatterplot, like this one from Gapminder (gapminder.org): 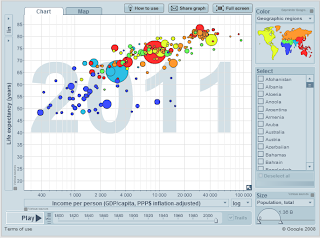 I have asked Kosara whether he plans to pursue research into the potential interaction between visual and linguistic metaphors he mentioned in the HBR blog. I'll let you know if I hear anything from him...