In the book "Six Thinking Hats", Edward DeBono demonstrates how we can all become better thinkers by using deliberate role-playing.

The premise of the method is that the human brain thinks in a number of distinct ways which can be identified, deliberately accessed and hence planned for use in a structured way allowing one to develop strategies for thinking about particular issues.

With his use of case studies and real examples of his methodology, DeBono describes the 6 Thinking Hats as:
Having identified the six states that can be accessed, distinct programs can be created using a developed sequences of hats which encompass and structure the thinking process toward a distinct goal. Typically a project will begin with an extended white hat action, as everyone gets "on the same page" creating a shared vision of the issue being addressed.

This methodology is believed to have a positive impact on the thinking process.

Download the ConceptDraw 6 Hats mind map template created on the basis of the principles laid out by Edward DeBono in his book, "Six Thinking Hats". 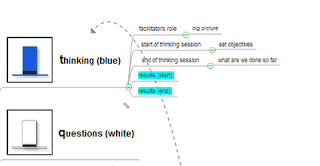