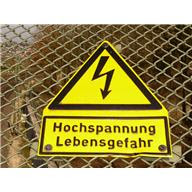 Have you ever had a writing assignment that required you to write in a new language? I don't mean a foreign language--just a new one.

I recently began preparing to ghostwrite for a consulting firm. I'd glanced over such articles in the past. But this time I needed to take a deep dive. I was surprised to learn how different it was from everyday English. So the first step I needed to take was to become familiar with the words, phrases, and syntax used in this fairly arcane world.

I began by reading through a number of articles already published by the firm. As I read, I used a ConceptDraw mindmap to begin to capture and categorize the language:

I noticed right away that the verbs used by the consultants were different from the ones I normally use. So I just started typing them into the map, along with accompanying words to help me understand the context in which the words were used:

I did the same with the other major parts of speech, such as adjectives: 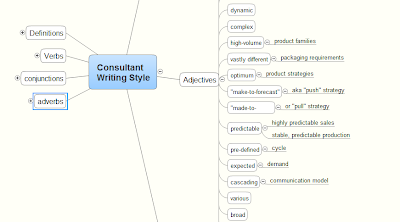 I also started a branch in the map to capture some of the tendencies in the writing. Part of the magic of writing like a consultant, it seems, it creating long, meandering sentences--and using passive verbs.

Like all professionals, consultants also use a smattering of "terms of art" and acronyms for which I had to find definitions. I'm keeping them in the map as well: 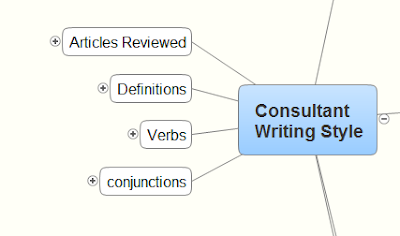 And as I read an article, I add it to the "Articles Reviewed" so I know which articles I've already parsed for the map.

There is much more to learning to "write like a consultant." But having a concise way to capture and organize this niche language is a good first step.