Have you laid eyes on eagereyes?

Making the seredipitous choices that constitute the average Internet experience, I found a site today called eagereyes.org. If you're interested in the visualization of information (and if you mind map, how could you not be?), then you might like this site.

The site is run by Robert Kosara, a Visual Analysis Researcher at Tableau Software, and formerly Associate Professor of Computer Science at UNC Charlotte. He says on the site that "He has created visualization techniques like Parallel Sets and performed research into the perceptual and cognitive basics of visualization."

A recent post is called The Revolution Will Be Visualized. Here's an example of one of the data visualizations, this one on the number of gun deaths in the U.S. in 2013:

Here's another way to look at the data: 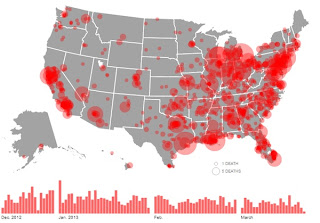 Not the cheeriest subject matter, I admit. But it does give you a aense of the power of information graphics. Where is the cross-over between mind mapping and information visualization? What does that Venn diagram look like?